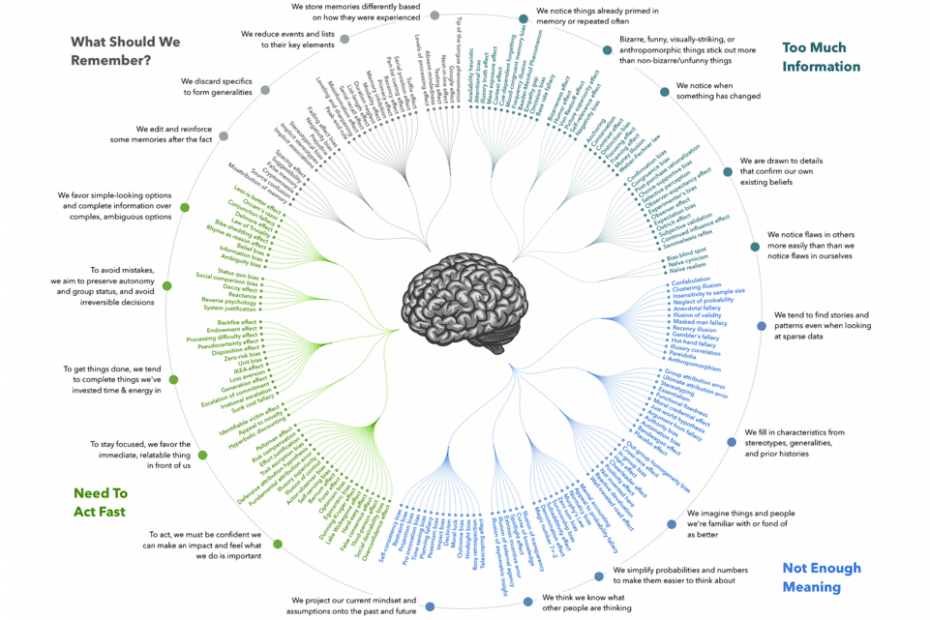 Bias affects us all and influences every almost every aspect of our professional lives. It influences our actions and decisions such as what job we choose, who we hire, who we promote, how we work with people and what advice we consider (and ignore). Research has identified over 185 biases that affect decision making. This is an overwhelming number and beyond the ability of any person or team to protect themselves from completely.

So over 2 articles we’re going to give you the Top 10 most common biases that show up when we are making decisions and some simple actions you can take to help prevent or reduce their impact.

Why are we prone to biases

When it comes to making decisions, humans are prone to “satisficing” (March and Simon 1958). To save time we search for alternatives only to the point where we find an acceptable solution rather than search for the optimal one. As a result, we take shortcuts. We use rules of thumb or heuristics when we make decisions.

Mostly this saves a lot of time, and we often arrive at an adequate solution. However, it exposes our cognitive limitations and can lead to errors in judgment, not because of a lack of intelligence but because we are human. As we apply these rules of thumb it exposes our tendency to believe that some people or ideas, are better than others. As a result, our decisions may not take into account the full range of options available to us or we might become fixated on a piece of information we find early on the decision-making process to the exclusion of other useful information.

According to extensive research, even highly experienced, extremely competent, and well-intentioned managers are prone to the pitfalls of biases such as ignoring feedback from previous bad decisions or focusing too much emphasis on social approval rather than doing the right thing. Studies have shown that biases, heuristics, and framing effects have a proven negative impact on decision making causing a loss in productivity and reducing output.

The planning fallacy is the tendency to underestimate the time required to complete a task based on over optimistic predictions. It’s a universal phenomenon that even occurs regardless of an individual’s knowledge of how long it takes to complete similar tasks in the past. A study found that only 30% of students finished their thesis in the time they predicted.

Even projects with extensive budgets and access to the best talent are prone to this with 25% of failed projects due to poor time estimation (PMI 2018). Crossrail, the giant infrastructure project to deliver train services across London was due to cost £14.8bn and start operating in December 2018. However, it will start in 2022, £4 billion over budget. So why does this occur so regularly? One of the primary drivers is that when we start planning a project, we will start listing all the tasks that need to be accomplished, who we need to help us and the resources we need. We would be much better served taking the time to research similar projects and learn from other people how they tackled the problem, what went wrong and what they wish they knew at the time. It’s also useful to define your priorities when you make the decision. It’s easy to get excited with a new project or decision and add many features that are useful but not essential. This extends the time required to complete the project and adds additional complexity which can make estimation difficult. Performing a pre-mortem, an exercise where we imagine that a project has failed and work backward to determine what could have led to the failure is an effective way to identify what could potentially delay our decision.

Action: Have you spoken to people who have delivered a similar project or made a similar decision? What challenges did they face?

The halo effect is a bias that can impacts the way we perceive a person, brand, product or company. For example, if a company like Amazon is deemed as successful then people will tend to assume that all their practices must be exemplary.

Action: Have you researched what other (maybe less successful) organisations have achieved from the applying the same solution.

It’s hard to abandon a project once we’ve invested so much of our time and money into it. Known as the sunk-cost fallacy, it’s a trap many decision makers fall into as they continue to commit resources to recover the losses from an initial investment. We continue to try the idea or project work even after it becomes economically unwise

For example, we invest £50,000 on a new computer system. However, its turns out to be full of bugs and unreliable. So we consider whether to get rid of the system or spend even more money on trying to fix it. Economists would recommend that the original £50,000 is a sunk cost that can’t be recovered. This money has gone and shouldn’t be considered as part of the decision in hand. However, we are often tempted to push on ploughing more money in the hope we can recoup our losses.

Action: Are you letting feelings of wastefulness or guilt from past decisions influence your thinking, rather than focusing on current and future costs?

Many decisions are based on numbers. Therefore, it’s important to recognise which numbers are proven indisputable facts and which are estimates. When we use estimated numbers, it’s vital to understand what are they based on? Often initial estimates are best guesses. As the process moves on, their accuracy is not challenged, and they become assumed facts leading to the decision being based on an incorrect number.

Action: Ask yourself “How reliable are the numbers we’ve base our solution on?”

Research by behavioural scientists has identified that people feel the pain of a loss twice as strongly than the pleasure of an equivalent gain (Tversky and Kahneman, 1979). To put it simply, most people think it’s better not to lose £50, than to find £50. Often when managers consider risky decisions, their wish to avoid losses is stronger than their desire for gains. The fear of incurring losses prevents individuals from taking well-calculated risks which are essential to growth. No one wants to be the person responsible for a failed project.

If you find yourself overly focused on the potential losses, try reframing it and also focus on the potential gains and understand that taking risks is an inherent part of organisational life

Action: Are you framing the decision too negatively, can you take a more balanced view?

So as you can see biases can have a significant impact on our decisions. Therefore, it’s vital we’re constantly alert to their influence and taking positive action. In the next article we’ll go through the Top 5 biases that impact decision making.

What are the biases that you experience or see in others when making decisions. What tactics do you have for addressing them?